We've had a lovely Memorial weekend here in Maryland.  Everything is lush and verdant, and I'm tickled with my roses.

We attended a Memorial Day picnic at my father-in-law's development where they honored quite a few WWII veterans, and a number of Korean War and Viet Nam veterans.  I thought a lot about my dad and wondered if he would have sat up there with the others.  There were two other men from the then Army Air Corps.  My dad "flew the hump" in China/Burma -- a still unsung part of WWII.  I'm so proud of him.  We still have his silk maps and the original cases.  I'm wondering if the Smithsonian or perhaps the San Diego Air and Space Museum might be interested in them.

Anyhoodle... Our next stop on the cruise was Los Angeles which boasts two VERY large ports:  Santa Monica and San Pedro.  We docked at San Pedro and then hopped on a bus to Warner Brother Studios.  The shenanigans continued as before getting off the ship, we had to fill out a US Custom's Declaration for things we had purchased.  Remember that our last port was San Diego.  Isn't that still part of the US?  We figure the cruise line had really angered someone in Southern CA. 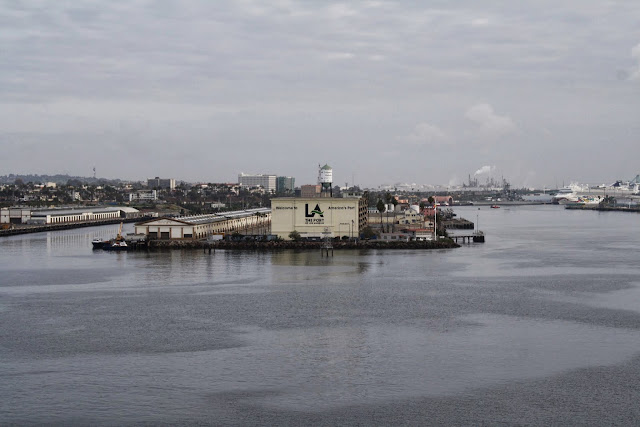 I've never been to LA -- except the the LAX to change planes, and am kind of awestruck by the traffic and how large LA is.

We did ride by the iconic Hollywood sign and through the hills on our way to the studios.  It was a great tour and our tour guide, Megan, was extremely knowledgeable.

We were hospitably greeted by Daffy and Bugs. 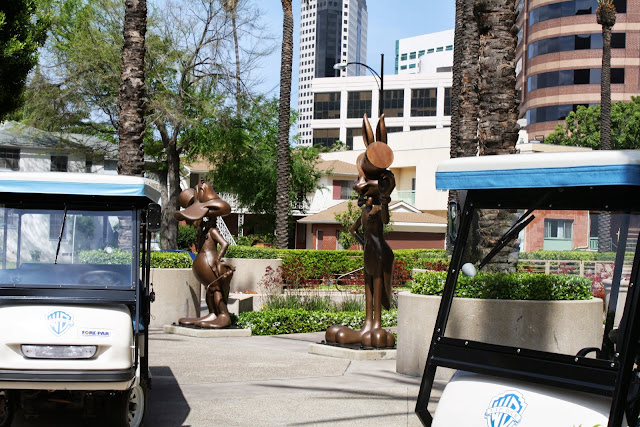 We visited the transportation 'hut' and saw the car from HARRY POTTER. 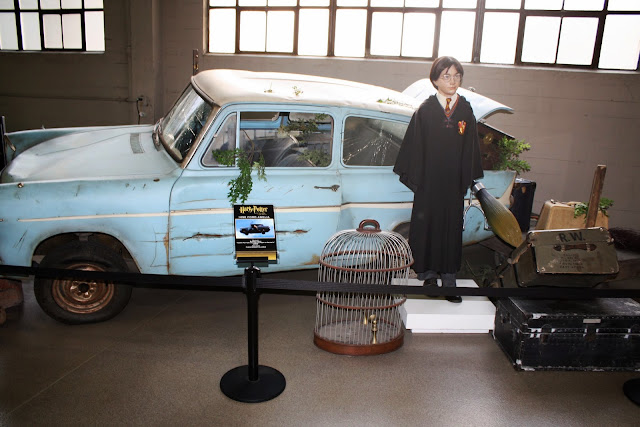 The MainStreet sets, some of which will look familiar... 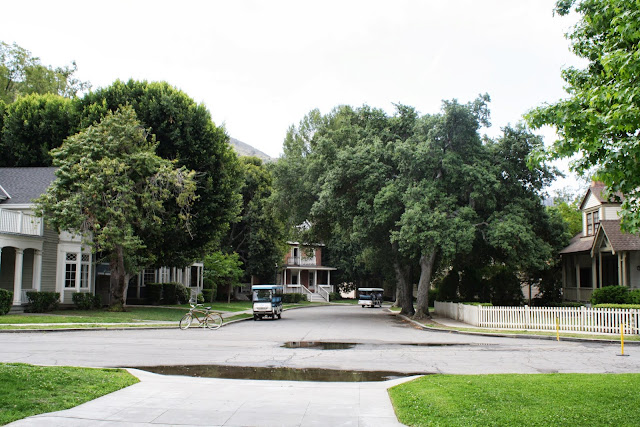 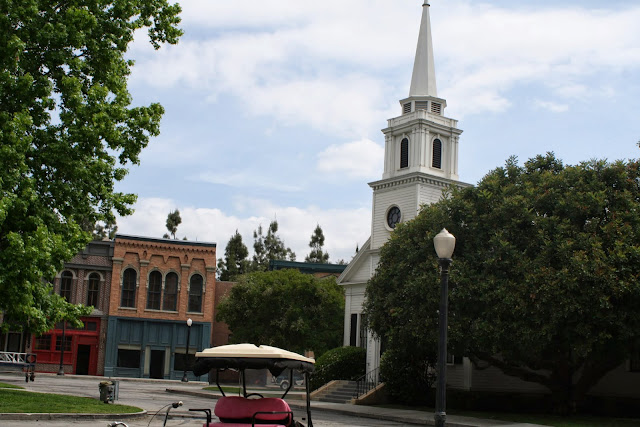 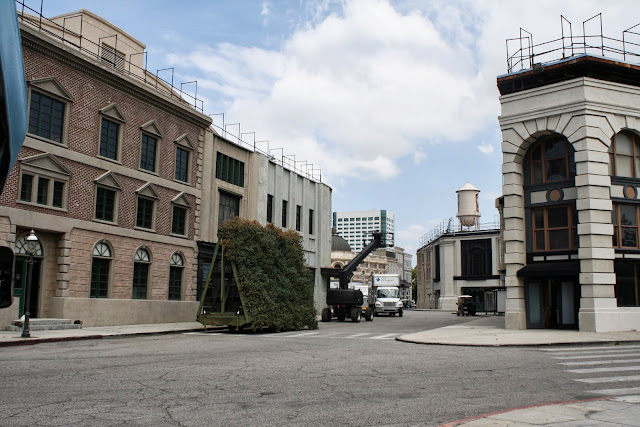 And visited the sets of MIKE & MOLLY, THE MENTALIST, and FRIENDS' set of  Central Perk, the only set in the history of the studio to have been saved in entirety. 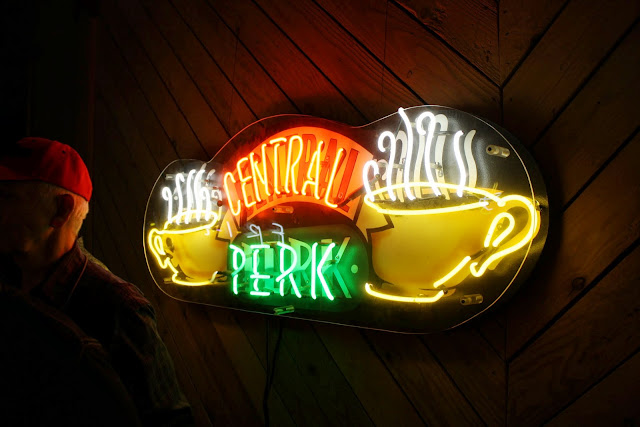 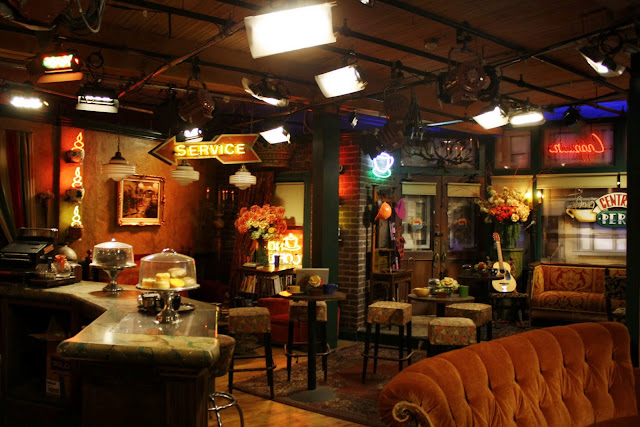 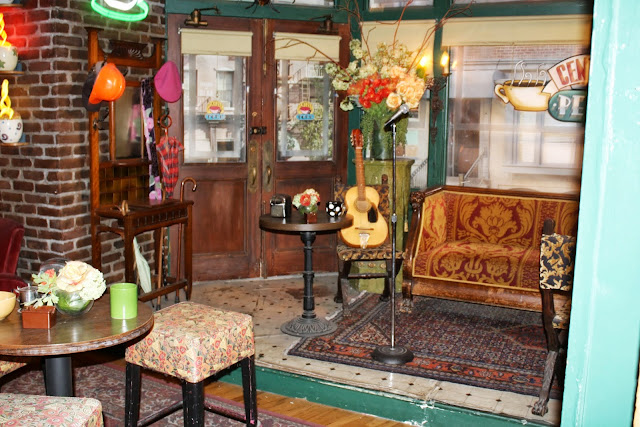 We had a lovely day -- it was gorgeous and about 68° -- no smog.  We returned to the ship for a little nap and dinner, very much looking forward to our stop the next day in beautiful Santa Barbara.
Posted by KathyA at 9:16 PM

Hi Kathy, I know you were proud of your Dad. Bet a museum would like those maps... That's special. Sounds like you had a nice Memorial Day.

Unbelievable what you had to go through getting on and off the ship... GADS!

I'm catching up on your cruise report. That was a pretty rough start. I'm glad it improved. sound like you were headed our way.

The next time you get to LA, be sure to see the Page Museum at the La Brea Tar Pits ... right on Wilshire Blvd next to Actors' Equity. A fascinating place, and a little gem of a downtown park.

Yes, this cruise is sort of backwards indeed. I'm following your cruise with great interest.

George volunteers at the Automotive Museum in Balboa Park. :) The perfect place for a car guy.

PS: Both those museums would probably like those things.

I'm glad things got better. I loved doing the tour of the studios with you. I remember visiting there probably about 25 years ago now. I found the tour fascinating. I'm glad you are enjoying it. I don't like the traffic in LA and remember having an accident there when we were on the trip I just mentioned. In fact during my time in LA, the temperatures were 108 in October; there was an earthquake; I saw a robbery where the robber ran out of the grocery store with his gun pulled while I sat in the parking lot; and we had a car accident. I was ready to go home after that!

Very interesting photos of the studios. Glad your trip got better. I have sailed on a 27 foot sailboat, but have never cruised on a ship. Might give it a try someday.