Coming Together or What a Great Neighborhood!

I went outside at about 8:45 to begin the monumental job of shoveling us out.  I didn't want to wait too long because even as cold as it is, as the sun beats down on the snow which begins to melt and becomes much heavier.  I was the third person out on the cul de sac, quickly followed by my husband and the rest of our neighbors.  About that same time a huge CAT back hoe and a smaller Howard County plow came by to plow us out.  The smaller truck became stuck and the back hoe had to pull him out -- the snow is that deep! 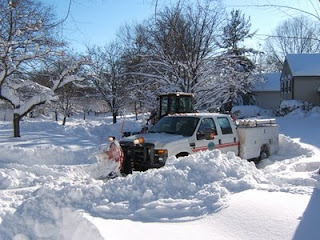 After he pulled the smaller truck out, the back hoe returned and did another swipe at our cul de sac.  I thanked him and offered him water, tea, or coffee.  He declined, saying he appreciated it, which is when I said, "Well, how about the love of a good woman?"  (Really, I don't know what gets into me, sometimes). Luckily he laughed; we all laughed, but we noticed he didn't come back....Well I wasn't referring to ME, for Heaven's sake!  But I guess he didn't know that.
Within the half hour, all of our other neighbors came out and we all helped dig through the snow pack at the bottom of each driveway and then took took off the top 6" so the snow blowers could work more effectively.  By about 1:00 everyone of the 29 houses in our neighborhood had clear driveways. 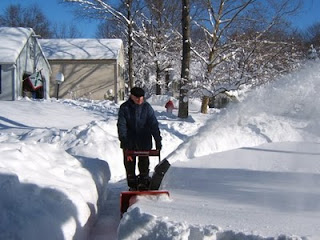 This is our neighbor, Don. 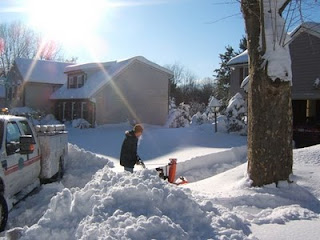 Our other neighbor, Ken--Linda is standing behind the tree.. 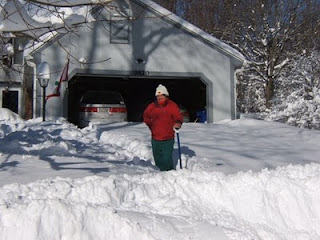 Jerry and I dug a path to his driveway, so Don and Ken could get the snow blowers through.
Linda, Don, Ken, and Frasier working together.....
Who would have thought we'd have more snow in Maryland than they do in Vancouver for the Winter Olympics??   We're now all watching the forecast again - there's a possibility that Tuesday  might bring us more snow.  For right now -- I'm in denial.
Posted by KathyA at 3:18 PM

Labels: Columbia Maryland, helping each other, neighbors, snow blowers, the day after the big storm

Oh my stars. I am completely stunned. I can't remember the last time we had a snow dump like that. The way your neighbors pulled together is pretty remarkable.

Nothing like community work to get the job done. I like when a snowstorm brings people together for a common bond.

Your post made me laugh. Just what woman were you referring to!? Seriously though, wonderful to know that you can all count on each other when needed, great neighbourhood you live in. Perhaps Canada and the U.S. can work out some sort of free trade agreement for the snow! Right now Vancouver sure could use what Maryland has :)

I love how the snow brings the neighbors out. I'm so sore! No plows in our cul de sac. We shoveled and snow blowed our way through.

all I was thinking was how did you manage with your knee??

What a great neighborhood you live in.

You're lucky to have such friendly neighbors who will help each other. It's always more fun when you have lots of people working together.

I can't believe how deep your snow is. This is a winter to remember.

What a long day. Clearing all that snow is a monumental task.

I read that in some places they're actually having to truck the snow out of town cause there's nowhere to pile it up after plowing it.

You are well prepared for such deep snow with proper shovels and snow blowers, and actually get snow ploughs down a cul-de-sac!! But even so, that is some snow!

Lovely how people pull together when really needed!

Lets hope you don't get any more and have to shovel all over again!

Snow is fun at first but I'm starting to get pretty tired of it. I can't believe more is on the way!!

That's really neat how you all helped eachother out - great neighbors!

That's really neat how you all helped eachother out - great neighbors!