Today I spent the morning at the gym; it was a good, sweaty workout. Tonight I should  sleep soundly.  Then I conquered the task of ironing patches on our grand daughter's Daisy/Girl Scout vest.  Once those patches are on, they're REALLY on.  The troupe numbers might indicate to some I'd been drinking heavily; I wasn't.  The good news is that they're on. 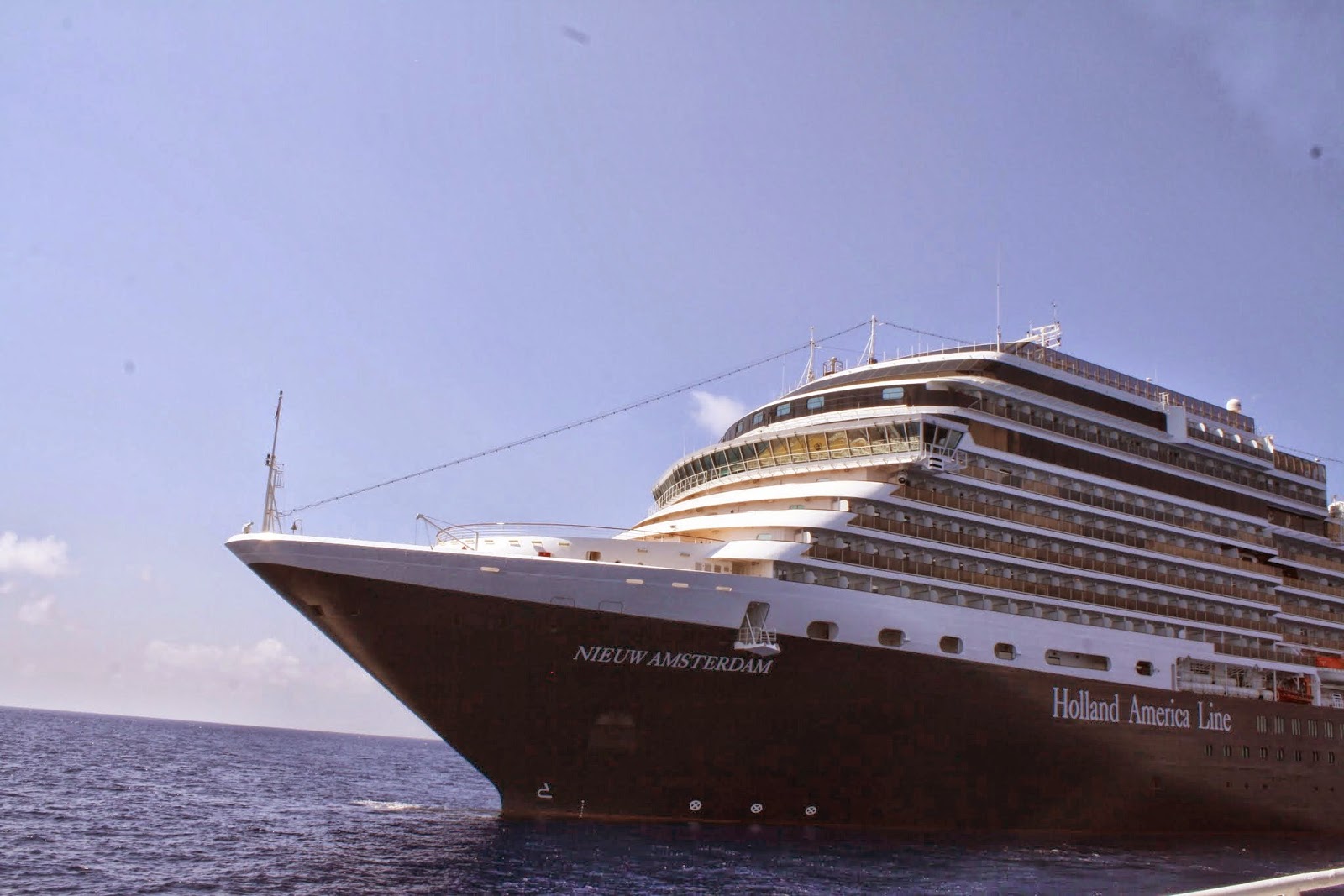 Big Guy and I must have had a premonition about the severity of this winter as in August we booked a cruise to the Caribbean on Holland America's MS Nieuw Amsterdam - the same ship we traveled from Barcelona to Venice on two years ago.  We had a lovely time and really enjoyed the warmth.

We cruised out of Port Everglades in Fort Lauderdale.  What an amazingly busy port -- seven ships awaited passengers last Sunday.  But they really had it together.  From the time our taxi dropped us off to our being totally checked in was fewer than 20 minutes.  We then waited only another 20 to board the ship.

Again, we had an armed Coast Guard escort leaving port, which always gives me chills.  When they escort a ship out of port, they put their vessel between all other port traffic and the ship that's departing.  The weapon is almost bigger than the young woman standing behind it. 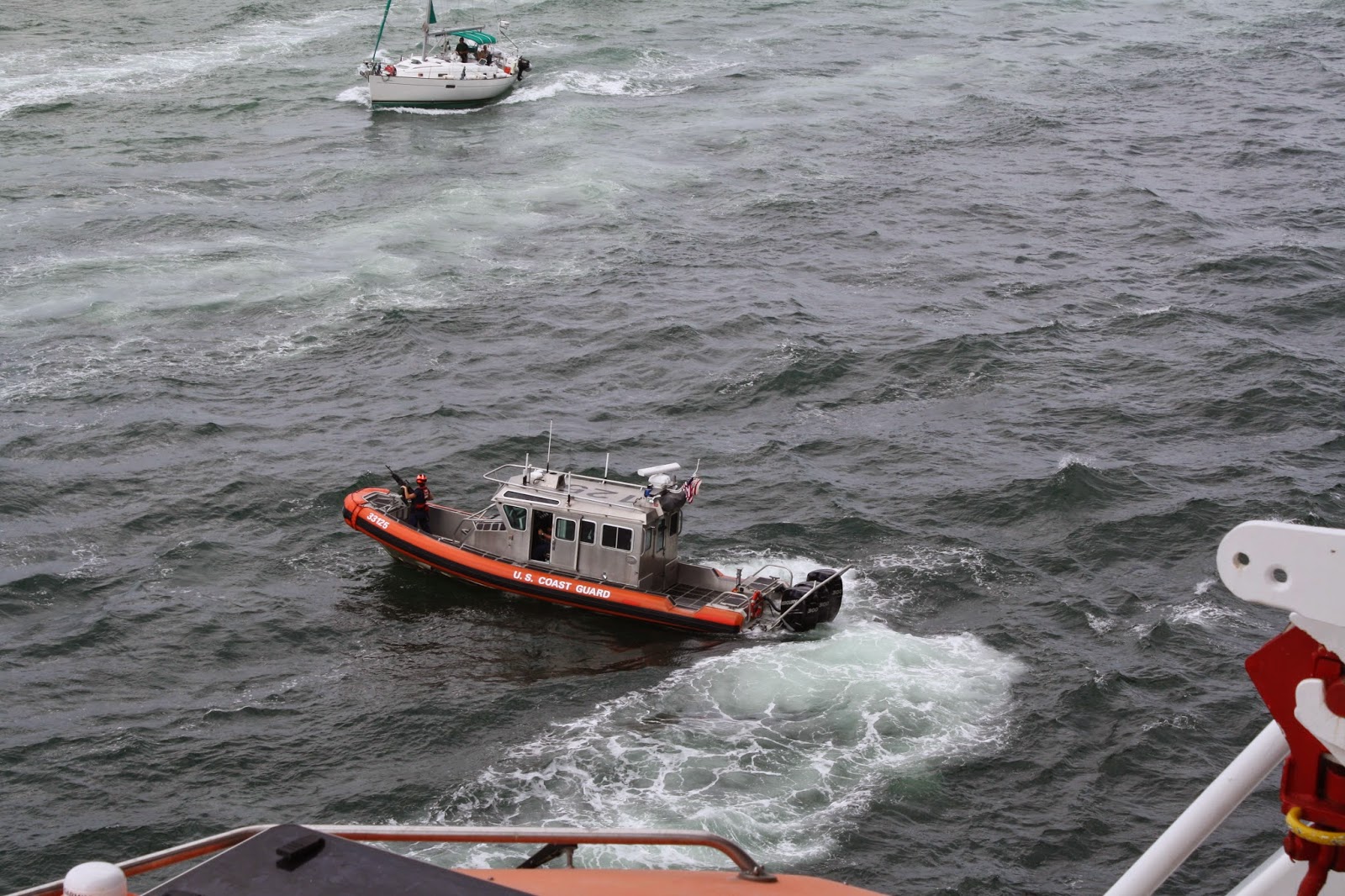 Folks lined up to take pictures of the ship leaving Ft. Lauderdale. 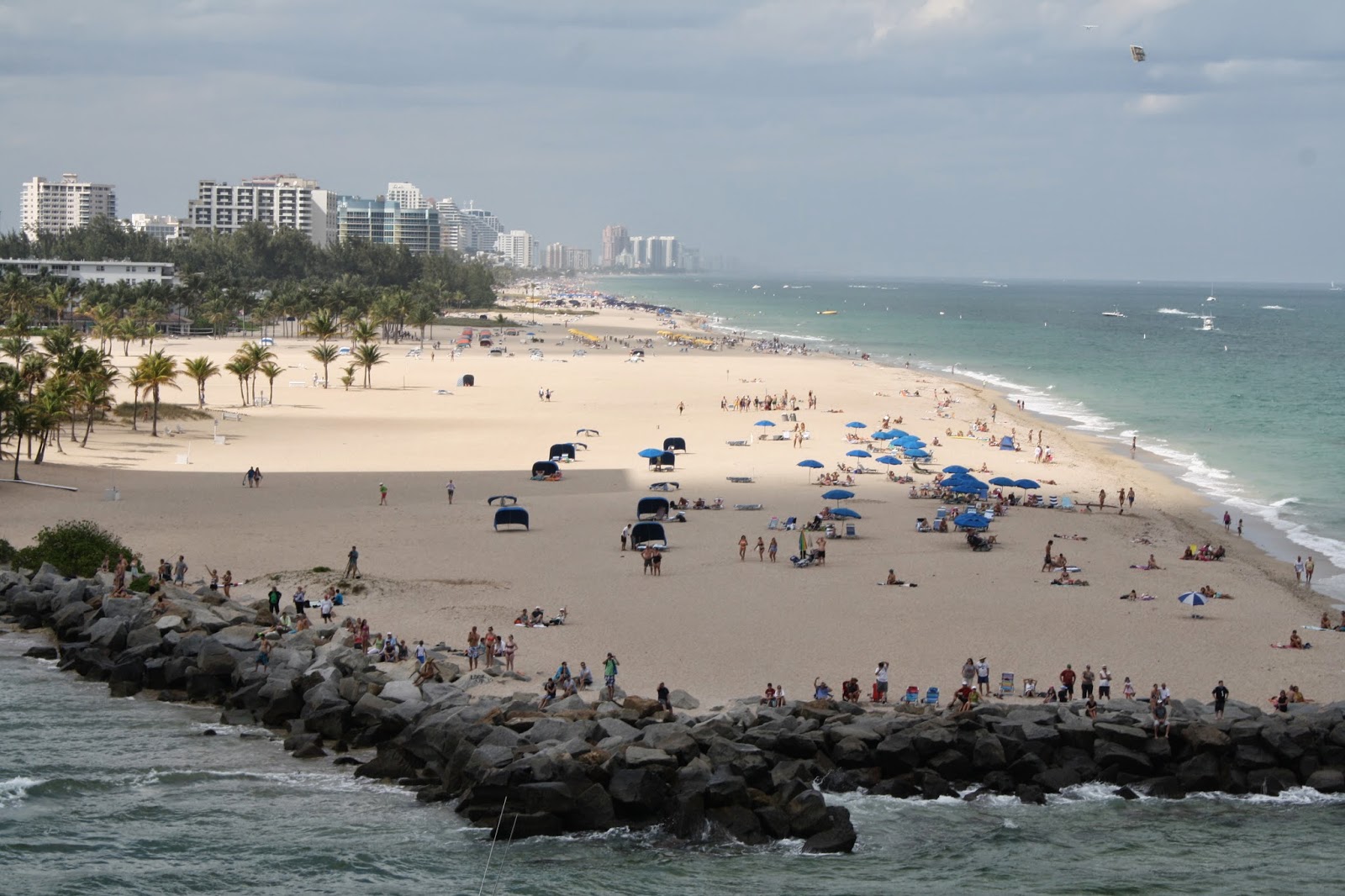 It's a magnificent sight when the mammoth cruise ships go through.  Our ship was not one of these -- we prefer the smaller ships, but it's still a neat sight to see.

We made four stops:  Half Moon Cay in the Bahamas, Grand Cayman, Cozumel, and Key West -- basically cruising around Cuba -- which was within sight.  We got off the ship only twice:  once at Half Moon Cay to swim in the most beautiful water I've ever seen... 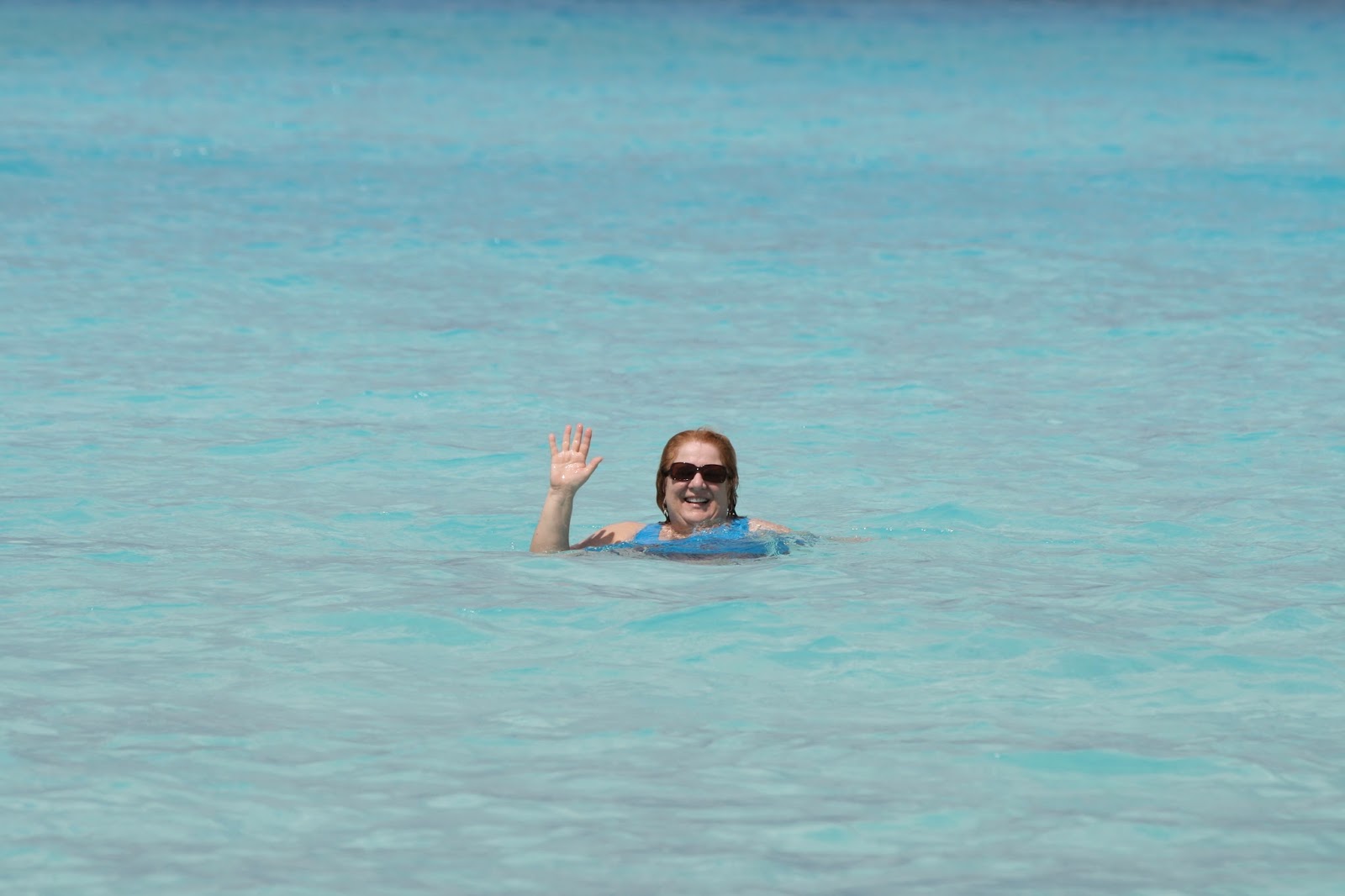 and where we could see the ship as it awaited our return. 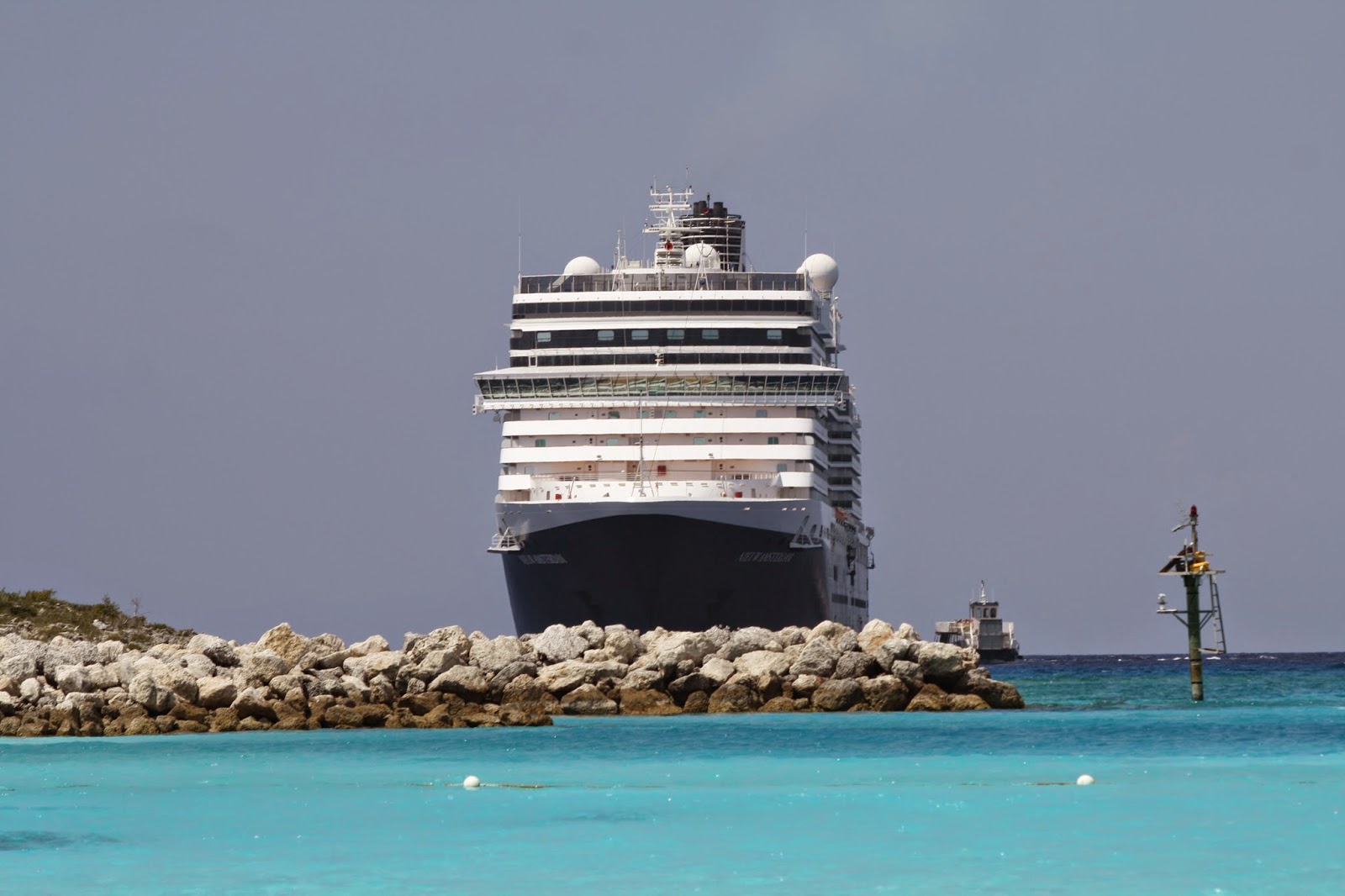 And finally at Key West, where the temperature was almost 90° and the humidity about 83%.  We had planned to have lunch at a favorite place: Conch Republic Seafood Company, walk around, and then enjoy some Key lime pie at Kermit's, but the heat really got to me and I needed to return to the ship.  I guess my body just wasn't used to that much warmth. 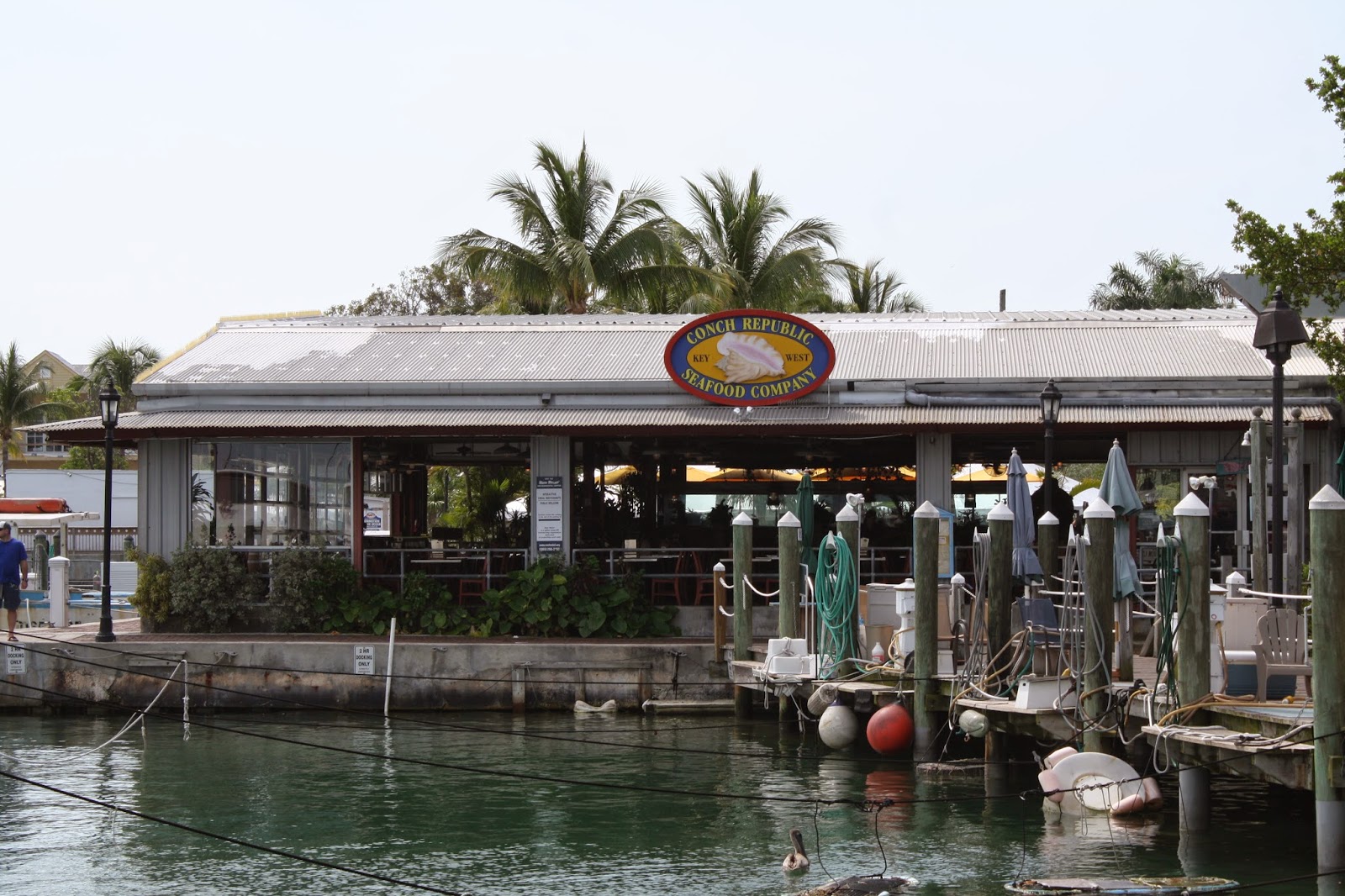 We returned home to Baltimore on Sunday, where we were met by an inch and a half of wet snow and sleet.  We've had spring temps all week though, and perennials and bulbs and starting to pop through.  Life is good.
Posted by KathyA at 4:33 PM

Hi Kathy, What a great time to take a cruise. Sounds wonderful. George and I took a South Caribbean cruise in 2001 (honeymoon) --and loved it.

Hope Spring is here to stay since it's almost hot here this week.. We've been busy working in the yard--spreading mulch after weeding. fun fun!

Your photos of the ocean look gorgeous. I immediately thought of our trip to Aruba a couple of years ago. Warm sun and surf. I am glad that your spring bulbs are starting to pop up through the ground. It's good for sanity sake.
Thanks for the recommendation about window treatments.

Hi Kathy-
What a treat to find your blog this afternoon!

I too am a retired English teacher and department head, and I have been married for 42 years, and we have 3 adult children (daughters) and two grandsons.

Life is good- and challenging- and good.


I am a new follower, and I enjoyed visiting.

What a lovely trip!

You picked a great winter for a Caribbian cruise. It's only too bad you were greeted with more snow on your return. I'm sorry you weren't able to enjoy your planned goodies in Key West.

Great idea to have a cruise just when the weather is so cold and miserable. I keep saying that to Mr.G but to no avail! Now it is really spring here, though still not what I call warm! We have masses of daffodils, and the blossom is coming out on the trees. Life is popping up everywhere. Thank goodness. I've had enough of winter! As I expect you have. Incidentally, my Great Nephew is an apprentice engineer with Holland America and is waiting to hear where his next placement will be. He's done the Alaskan cruises for months, so I think is hoping to go from Fort Lauderdale.

Yes, we did three weeks through the Panama Canal almost to home. Way to hot for me down there....108. Nice pictures from you tho.